We had a side dish made of soya chunks last night. As vegetarians, we started with assuming that we may not like soya chunks (many years ago), given the association with soya chunks’ texture to chicken/meat, but have warmed up to it over the years. We quite enjoy it these days and make it often enough at home.

Since Ruchi Soya is in the news very often these days (see: Patanjali objects to lenders decision to award Ruchi Soya to Adani Wilmar), I casually asked my wife which brand of soya chunks we buy these days (recalling the iconic Nutrela brand from Ruchi Soya). She said, “the usual – mealmaker”. After dinner, I made it a point to look at the pack of soya chunks. It was a local brand, from a departmental store called ‘Plus Point’ (in-house brand, very common these days). But the label said, ‘Plus Point Meal Maker’!

I got curious about this word ‘mealmaker’. ‘Nutrela’ at least sounds like a brand name, but mealmaker, at best, sounds like a euphemism for a housewife! And ‘mealmaker’ is such a generic name, which doesn’t even signify anything remotely connected with soya or soya chunks!

All this led me to down to a rabbit’s hole to find out who exactly owns the word/brand name ‘mealmaker’. It’s all the more important if you Googled the word/phrase (as ‘meal maker’ or ‘mealmaker’), you’d notice that almost every recipe featuring soya chunks, the reference is also to ‘meal maker’. There are places where people say that ‘meal maker is the trade name for soya chunks (or TVP – Textured vegetable protein)! For such a common and widely used/assumed word, there was precious little in terms of who coined that word and who owns it!

I finally struck gold with Google Books! The two people behind ‘Soy Info Center‘, perhaps the most comprehensive website and research center about soya, are William Shurtleff and Akiko Aoyagi. They have written several research papers on how soya entered many different countries. Here’s a detailed account of soya entry into India (across 2 lengthy pages – page 1| page 2!) – it includes a fascinating account of the kind of people (both from the US and in India) who were instrumental in bringing soya into Indian mainstream, in different forms. Some fascinating nuggets (pun unintended) from the larger story:

The duo has also written several research notes on the topic, including “History of Modern Soy Protein Ingredients“, “History of Soybeans and Soyfoods in South Asia / Indian Subcontinent” and “History of Uncommon Fermented Soyfoods (379 AD To 2012)“.

The history of soya in those books extend the story even deeper, including the beginning of Ruchi’s soya factory (see: Business Standard story capturing some of the history)! Click on each picture to read the larger version. 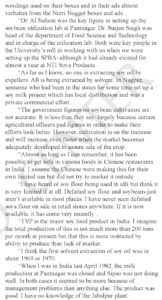 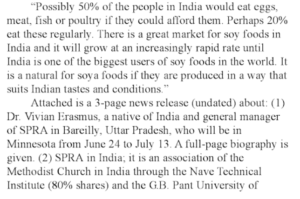 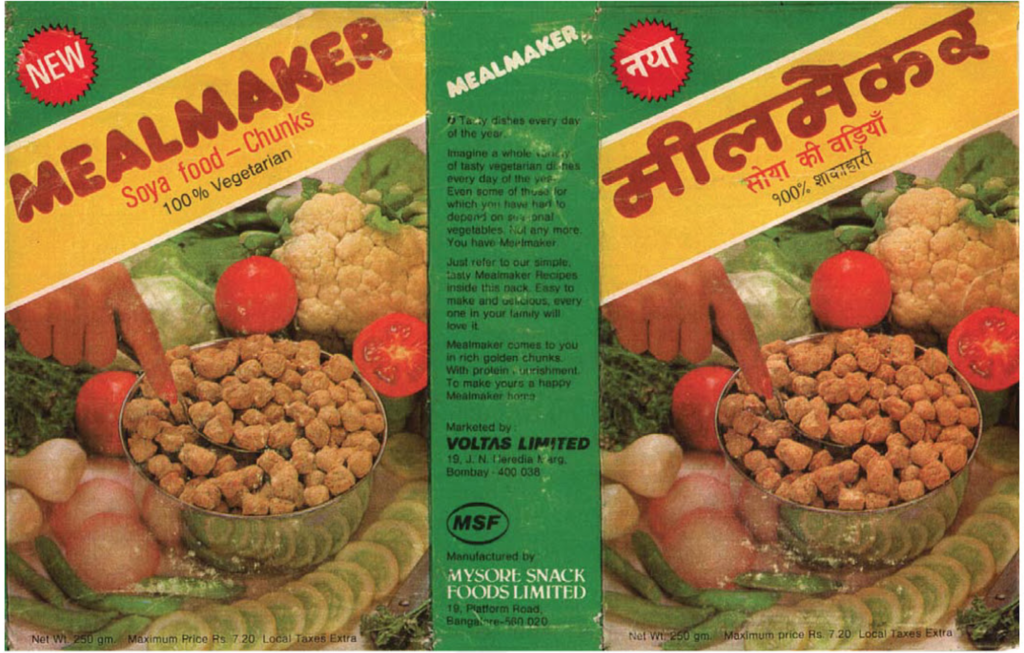 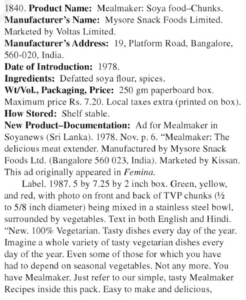 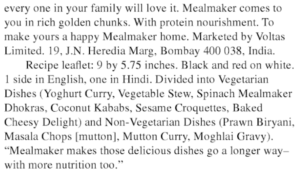 So… at last… Voltas owns (or owned) the trademark for ‘Mealmaker’, and we have all been using it as a generic term to denote soya chunks all this while. At least according to this website, the trademark was valid till June 26, 2018!! 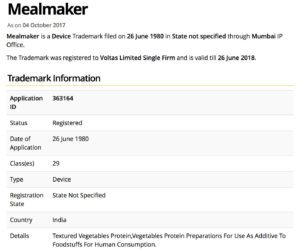 So, is there an opportunity to register the trademark afresh and own it?