Back when I started my career, I was in an organization that owned a couple of IT education brands. Those were the heady days of IT education in India, with the likes of Apple and NIIT ruling the roost and peddling everything from teaching C, C++ to Java and other advanced stuff.

The brand I worked for was not in the top league but we had a new web-specific course in the pipeline. And, we had big plans for its on-ground promotion.

I was a flunky back then and one of my tasks was to ensure that the cloth banners of the new course were in place, the night before the day we made the announcement. I went all around Delhi with our banner management vendor to make sure things were in place.

The other part entrusted to me was to make sure that the course’s franchisees had all the promotional literature and curriculum material with them when prospects walked in to know more about them.

Why am I writing this? Because Big Bazaar has a print ad today in Bangalore Times (Times of India’s city supplement) and it too has a Facebook URL. After Basics Life and Mantri Square Mall, here’s the 3rd recent brand that has a Facebook URL in its print ad – at least, the 3rd of what I’ve seen. 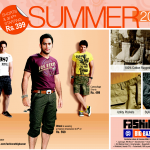 How does my flunky story connect?

For just a mere cloth banner, we were so keen on making sure that the back-end was in place – that there is something of interest to prospects when they walk in. To hook their attention. And here is Big Bazaar, a national brand, that adds a Facebook URL treating it just like it was a standard website URL.

Take a look at the Facebook page. The number of fans is immaterial. The question has always been about, ‘What is in it for me?’ answered from the audience’s perspective.

Is there anything? Nope! It is just a glorified website, under Facebook’s domain. No doubt, the moderator seems interested in answering queries, albeit selectively, but the most important factor, I believe, is, ‘Why should I join this fan page?’

Is clothing at Big Bazaar a fannable brand? Not in my opinion – it is a low cost, affordable clothing brand – not worth flaunting. It’s functional and decent, not a cult brand. So, why should I, the reader, become a fan? The page doesn’t answer that. It has a few videos, photographs and also posts press clippings about its brand! It was the same issue in the Mantri Facebook page too, incidentally!

You could ask – what more can they do? Take a look at Basics Life’s page – they have a frequent buyer program, for heaven’s sake! Now, that’s sensible thought, though there are 3 comments in that tab that show that people don’t understand the initiative!

You, as a brand, has caught the attention of a reader enough to make him go online and visit your page – that is your second level of engagement after having got his attention on the print ad. How can you make him stick?

A website, at least, was and is still is considered a one-way broadcast – so, readers do not visit websites as often as brands want them to. Quite understandable. But a Facebook page is not a website – or, it need not be, at least by conventionally understood principles. It is usually seen as a conversational platform – so how difficult is it for brands to think about how to make a person join as a fan, particularly when you’re putting advertising money behind it too?

Big Bazaar’s affordable clothing line may have a handful of customer categories – the completely interested, value-for-money seeking customer; the occasional shopper; the completely uninterested and so on. So, why is it difficult to add elements to attract at least the first 2 categories?

Right now – as a reader, I do not feel like joining the Big Bazaar page as a fan. There is nothing there that makes me assume it is worth joining.

It also seems like an interesting paradox – earlier, when advertising-led models insisted that websites have a ‘registration’ tab to collect user information, it was a slightly lengthy process and people were wary of giving their personal details to join – so the reason for joining had to be spelt out very clearly, in the hope that it may enthuse people to share their personal details.

On Facebook, all it takes is a click, to join. Does the ease of joining mean brands do not need to communicate benefits of joining?

Or, does Facebook, as a platform, does not need communication of benefits, to join and people can just become fans for the heck of it? When I say benefits, it need not always be monetary – it could even be an online community-based benefit – importance/ visibility within the community could also be a valid gratification.

But yes, nothing like a monetary gratification – however small – to get the reader to go the 3rd level, the ultimate touch point – visit the store! It is a small gesture of gratitude from a brand for taking the effort to go from print…to online…to the store!

7 thoughts on “The Facebook URL: A misguided trend and a paradox”