I stumbled on a new range of Maggi Noodles in the departmental store near home and I was elated! As a huge fan of the brand for as long as I recall, and as a vocal instant noodles fan (see: A legitimate rival to Maggi in India, finally – ITC Sunfeast’s Yippee! and Yippee’s 3rd flavor is out – but why Chinese Masala?) a new variant of Maggi is always exciting news.

When I saw this new variant, I was mildly disappointed. It’s from the Nutrilicious range, one that had previously middling variants like Oats and Atta, both of which I found terribly underwhelming.

But the new variant, called ‘baked noodles’ and with sweetcorn, did look alluring, as a pack. Obviously, I bought it. 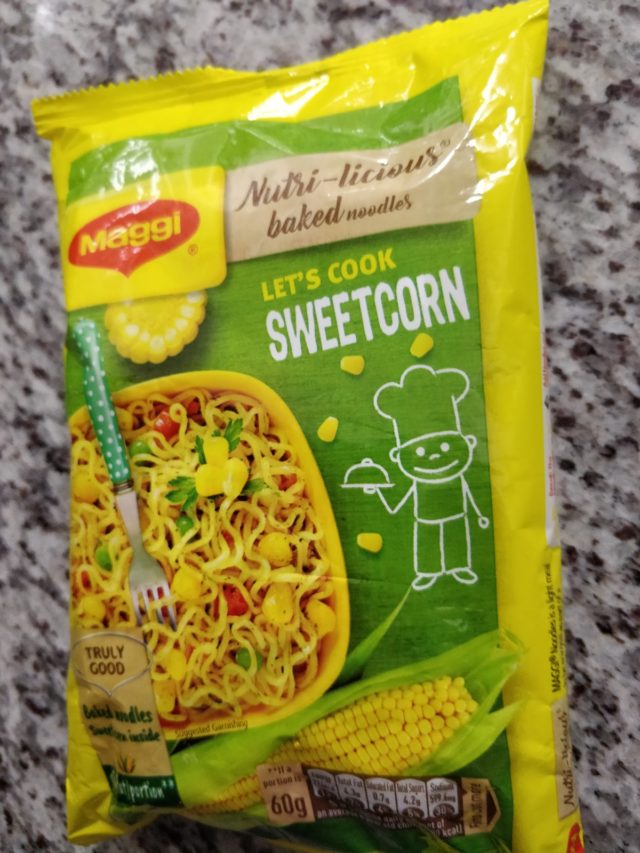 Tried it yesterday for breakfast.

The first BIG surprise is that in all these years of being a Maggi fan, this is the first time I notice a separate pack for the noodles (cake) inside the outer wrapper! Maggi was always right inside the pack – you open the pack, remove the noodles lump (break it into 4, of course) and remove the masala sachet. In the Sweetcorn variant, the noodles is packed in another pouch! That’s quite a culture shock 🙂 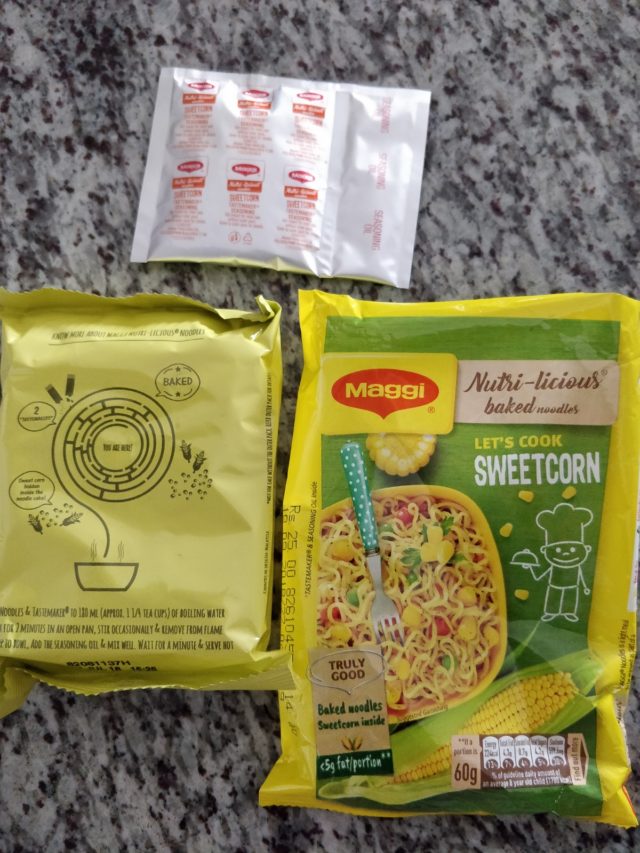 The 2nd BIG surprise is that for the first time ever Maggi has included a pack of seasoning oil! This is a standard fixture in Wai Wai, of course, and it is interesting to see Maggi pick a thread from what is arguably among the best tasting instant noodles in India (from Nepal!).

Digression: Wai Wai is my No. 1 preference. Koka (vegetable flavor) and Yippee come next. 3rd is Maggi, which is almost like curd rice (comfort food) now. Digression ends.

So, I made the new Maggi with huge expectations. It did smell good. The masala sachet had real sweetcorn in it, incidentally.

Taste-wise, it is as disappointing as the rest of the Nutrilicious range. It’s fairly bland, compared to the main Maggi masala, and given all the sweetcorn, it is even a bit sweet! That’s quite a huge departure for the Maggi ‘taste’! I have a feeling Maggi is targeting a much younger audience for this range given this uniquely different taste (far younger than its usual target audience – say, 7-12 years). That perhaps also explains the extensive ‘health’ notes in the pack. 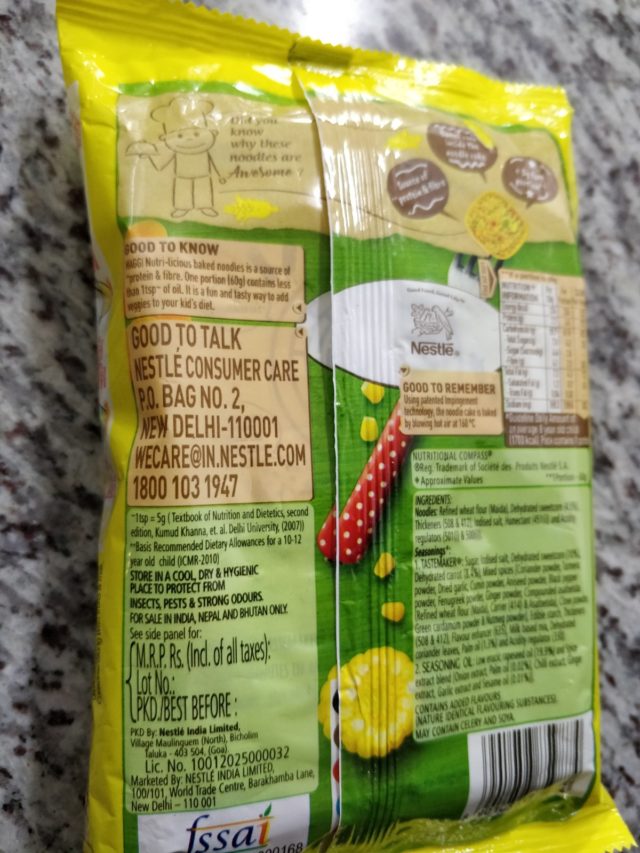 While the Nutrilicious Oats and Atta range had, “Textbook of Nutrition and Dietetics published by Department of Food and Nutrition, Delhi University”, this one has, “Textbook of Nutrition and Dietetics, second edition, Kumud Khanna, et. Al. Delhi University (2007)”. Sounds similar, of course, but the next sentence is quite a path-breaking addition for Maggi. It says, “Basis recommended dietary allowance for a 10-12 year-old child (ICMR-2010)”! This is perhaps the first Maggi that I have seen (in India) that has a specific age group mentioned in the pack and that brings me back to my earlier point about Nestle targeting a much younger audience for this one.

Understandably, my 8-year-old daughter loved it! We do not give her any kind of instant noodles at all (except for a fork-full, for taste, when my son (15) and I are eating it), but this one seems like something that I can give her too.

As always, an important caveat. I have no illusion of Maggi, or any instant food, being healthy. I/we do not eat it often and it is at best a monthly-twice indulgence, nothing more. I do make it a point to try all new variants at least once, as a fan of the brand.