I was getting out of Bengaluru Airport earlier this week and found myself staring at a steady onslaught of billboards selling mobile phones. iPhone X, Samsung, Oppo, Vivo, Xiaomi… no other product category had so many brands advertising in a single stretch.

I then, completely randomly, remembered a very good looking businessman from the 1990s in India, but his name escaped my memory. ‘Mirchandani’ shouted a voice in my head… as in MIRC Electronics, the makers of Onida? Nope. I had to search online to find the name and face from my latent memory. Kabir Mulchandani of Baron International! A dashing personality who was spoken about as much for his looks and suave nature as much for his business acumen. He was on the cover of business magazines as the man who turned the Indian television (hardware) industry upside down with his selling tactics and cheap TV sets in the 90s, all backed by a blitzkrieg of advertising. 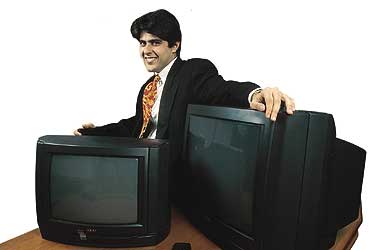 I started wondering… where is the guy now? A man as popular as that… he is nowhere to be seen now! Then I Googled and read about his move to Dubai, dabbling in real estate business in Dubai, his jail term there (yes!) and his subsequent acquittal.

Now, beyond this one man, some of the parallels seem compelling and interesting as observations.

Television sets were a super hot category back in the late 80s and 90s in India. I still remember a scene from the 1989 Tamil film Pudhu Pudhu Arthangal which portrayed the craze back then so presciently. A well-known singer (actor Rahman) who has been out of circulation owing to personal reasons (what the film is all about) gets back to the singing and endorsement circuit only to see his brand ambassador role for Solidaire TV go to a hot new cricket player.

The marketing blitzkrieg surrounding TV sets back in the late 80s and 90s reminds me of the mega jamboree around mobile phones now. Like phones, many TV brands were imported from assorted countries (Germany, US, Korea, Japan etc. unlike mobile phones’ primary production market now being China) and were either branded locally or sold with their parent brand (Akai, from Baron International is a good example).

Like mobile phone brand advertising, TV sets’ advertising was high-decibel back then, literally creating and maintaining a new category of household gadgets and ensuring every household in India had at least one TV set. Now, we have more than one, mostly. Mobile phones too, by nature of them being personal devices, tries and sells more than one per family since it is clearly targeted at individuals instead of families.

TV sets’ advertising was big on celebrity endorsement before they went into product-feature led communication having already established the need for the product. Mobile phones marketing focuses on both at the same time – use celebrities to endorse cutting-edge features.

Akai TV heralded an unprecedented way of bundling products along with TV sets. Given this dramatic move, Akai’s sales jumped from 75,000 to 180,000 and it became the largest selling brand with a 17.7% market share in just 4 years reaching the third slot in the market, by late 90s.

A rough equivalent (without the brush-with-law, of course – see paragraphs 9 and 10) of Kabir Mulchandani – in terms of good looks, starry ambition and a blazing trail of business success could be Micromax’s Rahul Sharma. If you see a profile of Kabir in India Today (almost 20 years ago, in October 1998) when he was on the top and Akai was a roaring marketing success, he talks about actual business success, including fantastic year-on-year growth and profit. Compare that with Micromax’s growth as told by Rahul Sharma in this Economic Times piece from last year. Both speak about business expansion and profit confidently.

It is particularly fascinating to read this 1998 profile of Kabir Mulchandani in The Economist. Remember, this is from 1998 – June 25, 1998, to be precise. A line goes, “Nobody can deny Mr Mulchandani’s success. He has greatly expanded the colour-television market in India (see chart) and he is planning to diversify into other products such as mobile phones” (I purchased my first mobile phone, a Siemens C25, in 1999, paying exorbitantly for talk-time!). In fact, in 1997, Akai had offered a bundled deal (it was famous for bundled deals!) in Hyderabad of a mobile for phone for a 21-inch CTV for Rs.23,490.

The only other category that is seeing so much money from a marketing perspective is e-commerce. Interestingly, if you pick any interview of any e-commerce major in India and you’d see the complete lack of business basics in terms of profits (or revenue in relation to investment or funding) and focusing on more existential concepts like GMV and funding.