On May 17th, Tennis champ Sania Mirza tweeted her love for OnePlus 3T gushingly. She ‘totally loved using’ it, it seemed. The minor annoyance for OnePlus brand managers was that it was tweeted using an Apple iPhone! 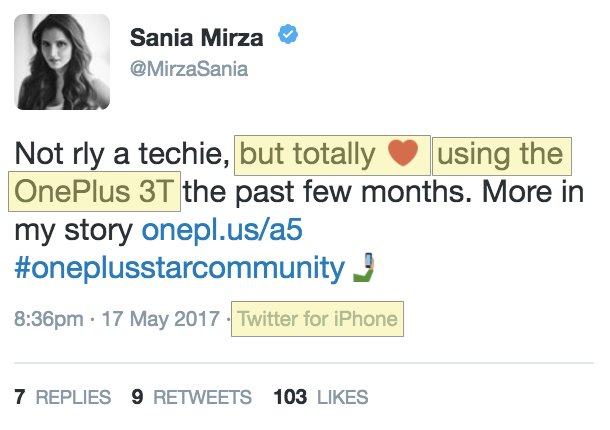 With that tweet, Sania joined the likes of Ellen DeGeneres and Oprah Winfrey who have previously professed their love for one device, but posted that from another device, visibly and evidently. 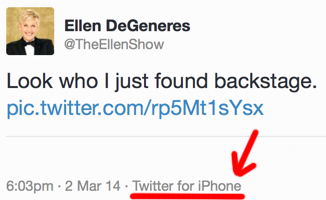 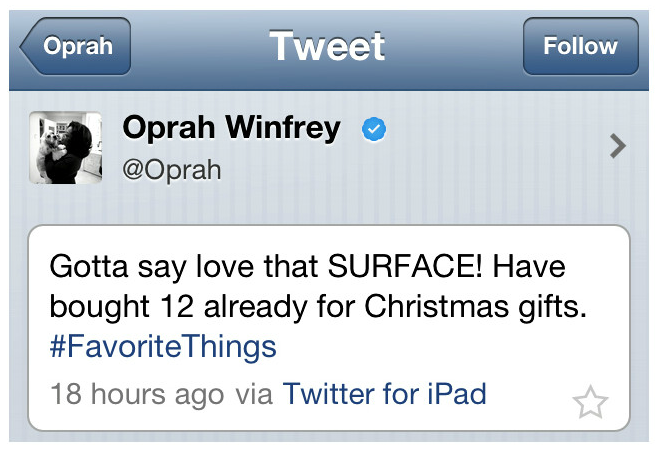 This morning, The Economic Times reports a similar story from the FMCG category – Shilpa Shetty’s Instagram post that shows Tropicana packs in her refrigerator, while she is a brand ambassador for rival juice brand, B Natural. 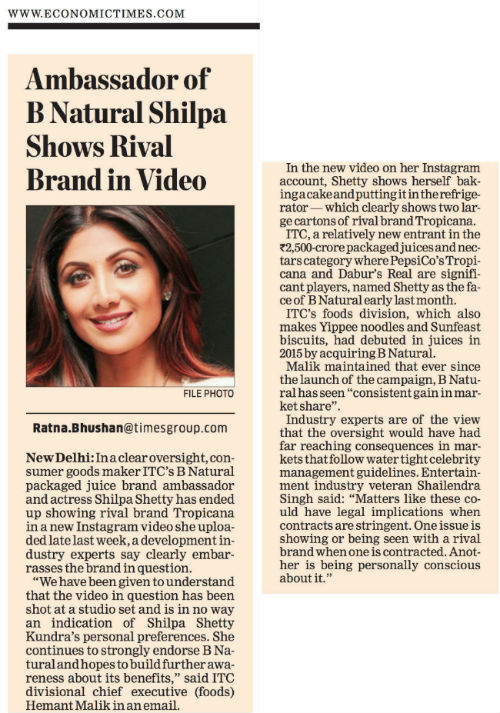 These cases are interesting for multiple reasons.

The most obvious reason is fairly straightforward – a celebrity, signed for a fee and for a period of time, to endorse a brand, has the responsibility to do what is right for that brand (as per the contract terms), and this includes not directly or indirectly endorsing a rival brand.

This makes perfect sense for a high-involvement brand. Like a car. Or a phone. Consumers usually spend a lot of time before picking a car or a phone, and this involves quite a bit of research. It may seem disingenuous on behalf of the celebrity if they are seen using 2 brands, particularly those that are competing.

The counter-argument to this goes like this: we’re talking about Sania Mirza, the internationally known Tennis player. She has enough money to buy any number of mobile phones at the drop of a tennis racket. From her point of view, a mobile phone may not fall under the ‘high involvement’ category at all, unlike normal people who happen to be the products’ buyers. From her perspective, iPhone could just be one of the many phones she owns and uses. OnePlus 3T could be another.

OnePlus 3T could, however, argue that it is the target audiences’ perspective on high-value/high-involvement that matters given that a celebrity, by default, could afford anything and everything and are really not like end-users when it comes to what they can and cannot buy or afford.

The second reason for why this is interesting is the fact that we’re trying to hold a celebrity responsible for something they have been paid for. Celebrities have been endorsing assorted products for decades and in the pre-internet/pre-social media era, the brand and the celebrity could limit the number of avenues in which they are shown together. Media/communication outlets were limited and expensive. So, celebrities could plan the exposure with the brand because it was all coordinated using a well-oiled machinery.

So, even if a celebrity is signed by say, Hyundai, chances are they could still be seen arriving in a BMW, for an event and nobody would bat an eyelid. But on TV and billboards, a Shah Rukh Khan would be seen endorsing a Hyundai. Somehow, there were no questions around a Shah Rukh Khan and the cars he was seen in while he was Hyundai’s brand ambassador as there are questions around Sania and iPhone v. OnePlus 3T. The exact equivalent, I suppose, would be a Shah Rukh Khan, sitting inside a BMW and professing his love for a Hyundai.

The 3rd reason involves the Shilpa Shetty example. A fruit juice, one that is available in a 1 litre Tetrapack, sold for about Rs.100-125 (usually) is a consumable product. It is a relatively low-involvement and low-value (it is fast moving consumer good, after all) product. It would seem perfectly natural to buy more than one juice brand pack a week, not only for celebrities but also the consumers since a trial of a new product is mighty normal and very affordable in this category.

Celebrities post tons of stuff online all through the day, either through their publicity team, or themselves. This happens across multiple social media platforms – Facebook, Instagram, Twitter, LinkedIn, Snapchat etc. Imagine a brand ambassador of a cola brand snapped at a restaurant drinking a rival cola (say, a visible cola can with the brand seen obviously). I’m sure the cola brands have fizz-tight contracts with penalty clauses for occurrences like this. So, the ask from the celebrity is not only to endorse a brand of cola but also be incredibly cautious that they are not seen in the vicinity of any rival cola/drink.

Given this, it seems odd that in categories like FMCG where even end consumers are extremely likely to stick to/buy/prefer more than one brand and even rotate between brands very often (because the bar for entry and exit is so low), we expect, for some reason, that celebrities stick to only one brand all across their waking life. That reason, as we know, is the contract between the brand and the celebrity. Nothing else.

So, should brands and celebrities relook the terms of contracts to reflect present-day truths about social media (overdose of communication) and, most importantly, end-consumer/target-consumer use-case scenarios of products? To be fair, no celebrity would consciously and obviously promote a rival brand after having signed a contract with a brand – that’d be both stupid and unethical. But, with categories like FMCG, the chances of them being seen amidst rival brands is just way too high, particularly when social media exposes them (almost) 24X7.

Shilpa Shetty’s Tropicana gaffe is at best an incidental error if at all it is an error in the first place. Could her husband be a fan of Tropicana, or her son bought it and given that a refrigerator is usually a shared product, all those juice brands are kept in the same place? This seems a lot more convincing than arguing that Sania Mirza owns 2 phones and hence, it is natural for her to tweet about one phone from another.

And finally – the 4th reason. Take a look at another one of Shilpa Shetty’s endorsements.

If audiences can believe that Shilpa Shetty not only actively takes part in the selection of utensil cleaners in her home but also consciously, by brand, recommends a utensil cleaner to her neighbor/friend, then why is it so difficult to believe that she buys more than one brand of Tetrapack juice? If viewers can buy the former, the latter is all the more easy to buy, and believe… and hence becomes a non-issue!