Much has been said and written about how peaceful the protest around Jallikattu was/is, in Tamil Nadu. It is quite an eye opener that this large a protest, started almost spontaneously, across multiple cities, has been incident-free in every possible way. Many have also written about the fact that not only were these protests incident-free, but the protestors were also human and displayed impeccable civic-sense, cleaning up the junk before leaving, forming human chains to let traffic move smoothly among others.

All this is fairly new and mighty impressive in the history of protests in India, which are usually marred with violence, paid goons infiltrating it to spoil the spirit of protest, molestation of women and generally being a severe impediment to the public. The result is usually that the protestors’ voice gets muffled in the inconvenience and damage they cause. Not with this Jallikattu protest, though – the situation seems to be the opposite! The cops have no reason to any action because these protestors haven’t done anything other than peacefully gather in places and shout slogans.

However, the violence is definitely present and taunting… elsewhere. This is not physical violence, but verbal violence. It is filthy, obscene, morbid and disgusting. The violence of words, online.

Take, for instance, a tweet that was dug up from September 2016 in which Rajinikanth’s daughter Soundarya is seen thanking PETA, the organization behind the ban on Jallikattu and has been the center of ire for the protestors. The tweet was resurrected (presumably thanks to a search for a keyword like PETA, on Twitter) and a coercive threat added to it, asking Soundarya to publicly disown her alleged connections with Animal Welfare Board of India (AWBI). This seems like a reasonable enough emotional ploy, but what follows in the form of Twitter reactions is mind-boggling. 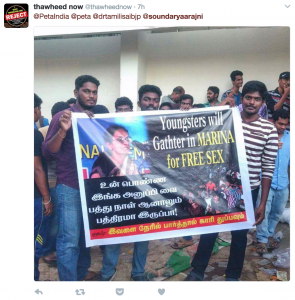 There’s a whole lot more against AWBI head Radha Rajan, and also in response to a tweet about her complaining to the Commissioner of Police, Chennai, about the abusive phone calls.

This kind of verbal violence is not isolated to Tamil Nadu alone. Take some protest banners from #WomensMarch in the US, where millions of women are protesting against Donald Trump (oddly enough, using the kind of language and behavior he is known for, to protest against him, thereby beating the whole purpose, and in a way joining him!).

I’m sure there are a lot more examples like these, across all protest locations, but online, there seems to be an increasing trend of abuse that many have documented amply, particularly with Twitter and Whatsapp as the leading platforms that perpetuate this behavior.

In the offline protests, a few people can dictate the manner in which the crowd behaves (till a point in time when they are outnumbered) to avoid resorting to violence and destruction. But there is no way to dictate what they can and cannot say. The same thing happens online, more so because these online protestors are in their own homes, not taking instructions from people on-ground or elsewhere. They say what they want, in a manner they think is appropriate.

I have thought long about this trend, and also why this is so pronounced in the present times. One conclusion I came to, after speaking to a lot of people who have a point of view on this and some of those who actually posted such abuse (yes!) is this: this is their own version of an argument, of dissent, of joining a debate.

Now, a personal, filthy abuse doesn’t sound like an argument or point of dissent to someone mature and educated, but we perhaps need to consider it from their side. They do not assume themselves to be articulate or erudite enough to match the opposite side with logical, nuanced points in the argument. That, in itself, opens a class divide – the articulate v. inarticulate. So, if you cannot join the debate with meaningful points, you join it with your own method – abuse and threat.

Is this childish? Yes, of course. But they feel the need to join the debate because social media tools allow them to participate. Earlier, they had no means of participating this debate using words… so they perhaps joined the protest offline and resorted to violence to showcase their anger. Now, social media allows everyone and anyone to broadcast their views, right in their own pajamas, sitting in their cozy bedrooms. There are no repercussions, particularly if you are not using your own name and have not connected your handles to a real-world profile.

So, zero repercussion; can do from the comfort of your home. The urge to participate in a cause, whether genuinely, or frivolously, is very high since there is no investment in terms of time or effort. The only thing lacking is the skills to make a meaningful point using the most appropriate words. But that is now seen as a privilege – a privilege that comes with better education, that comes at a cost.

The lack of that privilege adds to the anger, against those who can exercise that education to make sane, well-argued points. The result is to let go and abuse in any and every way. Does it make any sense? Not in many people’s opinion, but that is beside the point. The point is to participate, with whatever faculties one can muster. If that extends only to abuse and threat, then so be it. You may choose to call it a low hanging fruit, but if that is the only ammunition one has, what can you do?

With the proliferation of social media channels that put the power of words and broadcast of words across the world in every human’s reach, it seems increasingly likely that we learn to grow thicker skins against words. It doesn’t look like we’re any closer to avoiding the harshness of words… the social media channels are waging a losing battle against abuse anyway. In the larger scheme of things where entire cities are decimated and people are dying, harshness of words hardly seem like a cause worth taking cudgels against. In fact, talking about words being harsh makes one seem petulant!