I don’t think anybody would even dream of disputing Maggi’s continuously amazing hold over the instant noodles market in India. I’ve been a Maggi fan ever since it was launched…or ever since I was born, whichever came first/later.

I have even ‘interacted’ with Maggi, long before all this social media happened, as I had written earlier – see the post titled, ‘Social media lessons from a 70 year old man‘. I even tweet about my love for instant noodles and Maggi, in general – see these!

Going to consume Maggi's new flavor, Tricky Tomato. Will tweet my opinion after finishing it, in a few minutes.

Coming to think of it, Maggi is like Google; masala = search. Tomato/Curry/whateva = Buzz/Wave/whateva.

@rahulnambiar Knorr's taste didn't appeal to me that much. One time try-buy only, IMO. Went back to Maggi. Smith & Jones is the worst.

And, I make it a point to try every single new instant noodles brand in India. So, I’ve given enough chances to Nissin’s Cup-o-noodles, Smith & Jones, Wai Wai, Top Ramen, Horlicks Foodles and Knorr’s Soupy noodles, among others. I also try the slightly more expensive imported ones – there are many that are available in Indian store shelves but most are disappointingly un-Indian in taste.

Out of these, I had a brief affair with Top Ramen’s Smoodles despite protests from family that it tastes like sambhar rice! I liked it…but I always come back to Maggi. Even in case of Horlicks Foodles, I remember liking one variant, but the trouble is that there are S-O M-A-N-Y variants and they all more or less look the same with minimal color changes and tags that it is impossible to find out which one I liked. I gave up, after a brief, pointless query with my shopkeeper – even he seemed confused.

As for Knorr’s soupy noodles…the ad featuring Kajol is its undoing. There is so much hoo-haa around how to consume the damn thing, that I’m more interested in shoving it down those kids’ and Kajol’s throat. It doesn’t taste as interesting as the kids make it out to be is another factor. The less said about Smith & Jones’ taste and TVC the better, what with a 8 year old Shak Rukh look-alike and bizarre print ads directly naming Maggi that forced me to tweet,

Why is Smith & Jones targeting Maggi by name? http://twitpic.com/17nkc4 Don't they know the fanatic love for Maggi in India?

Since Twitpic is dead, here’s that Smith & Jones ad. 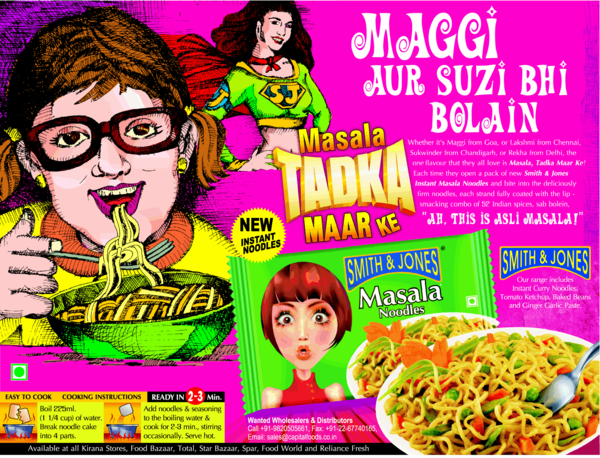 Cup-o-noodles is the other brand that I go back to…it tastes good enough and is incredibly convenient! On the convenience factor, I tried other new, Indian-flavored variants from Cup-o-noodles and they are plain horrendous. Even worse is Maggi’s Mania-something rice noodles. Maggi’s other new variants – Thrilling-something, Tricky Tomato, Multi-grain crap and Atta-blah are pathetic, in my opinion. So, it is not as if they have been innovating non-stop – it is still the original masala that rules. This multi-grain thingy is a particularly disturbing trend that Maggi and Horlicks Foodles are latching on to – disturbing to the taste buds, that is.

So, in reality, Maggi was competing with none, but its own brand legacy.

I noticed Yippee’s print ad sometime back and assumed they’re going to be yet-another instant noodles player in the Indian market. I wasn’t even planning to buy it, but my son (aged 6) insisted that I do, since he liked the color of the pack.

Relevant digression on packing: ITC Sunfeast’s Dark Fantasy directly rivals/copies Britannia’s Pure Magic, but the packing is what makes it super appetizing. For a change, I noticed a rich, matt finish pack (this is a new one – not the earlier dark blue standard pack) that I was tempted to pick up! That it tastes as good as Pure Magic only helps! End of relevant digression.

The Yippee pack is bright yellow and red (Maggi’ish!) and is relatively simple. There are just 2 variants – no mandatory non-veg (Chicken) variant yet – not that it matters to a vegetarian/eggitarian like me. The variants are Classic Masala and Magic Masala. Classic, is…well, good ‘ol masala…while Magic has a bit more tomato’ish feel and my son loves it.

The great news is simply this – I have an opinion on most new instant noodles brands and it ranges from Yeeeeeaaauck! …to…will try after a month, again. Yippee was the first ever, in a l-o-n-g time, that I liked instantly! So much that I got 3 more of each variant, and me and my son have been eating it with much glee, every other morning!

Now, I completely understand that this is a very personal opinion and you may not like Yippee at all given the strong Maggi loyalty. What is more interesting is not on the taste front, but on the distribution front.

In a mall like Total, I notice everything – Maggi, Knorr, Smith & Jones etc. No Yippee. In other places, no Maggi…or blink-and-you-miss, minimum Maggi. But loads of Yippee and others.

That this war between Nestle and ITC is being fought on the distribution front makes it all the more interesting. It is also a bit unfair but that is the market dynamics we all have to live with. If you do not find any traces of Yippee in any store in your city…relax. It is yet to be launched nationally and is available in very few states/cities, as per this news report.

As a consumer, I’m glad I have a legitimate, rightful alternative to Maggi. My son agrees too!

16 thoughts on “A legitimate rival to Maggi in India, finally – ITC Sunfeast’s Yippee!”