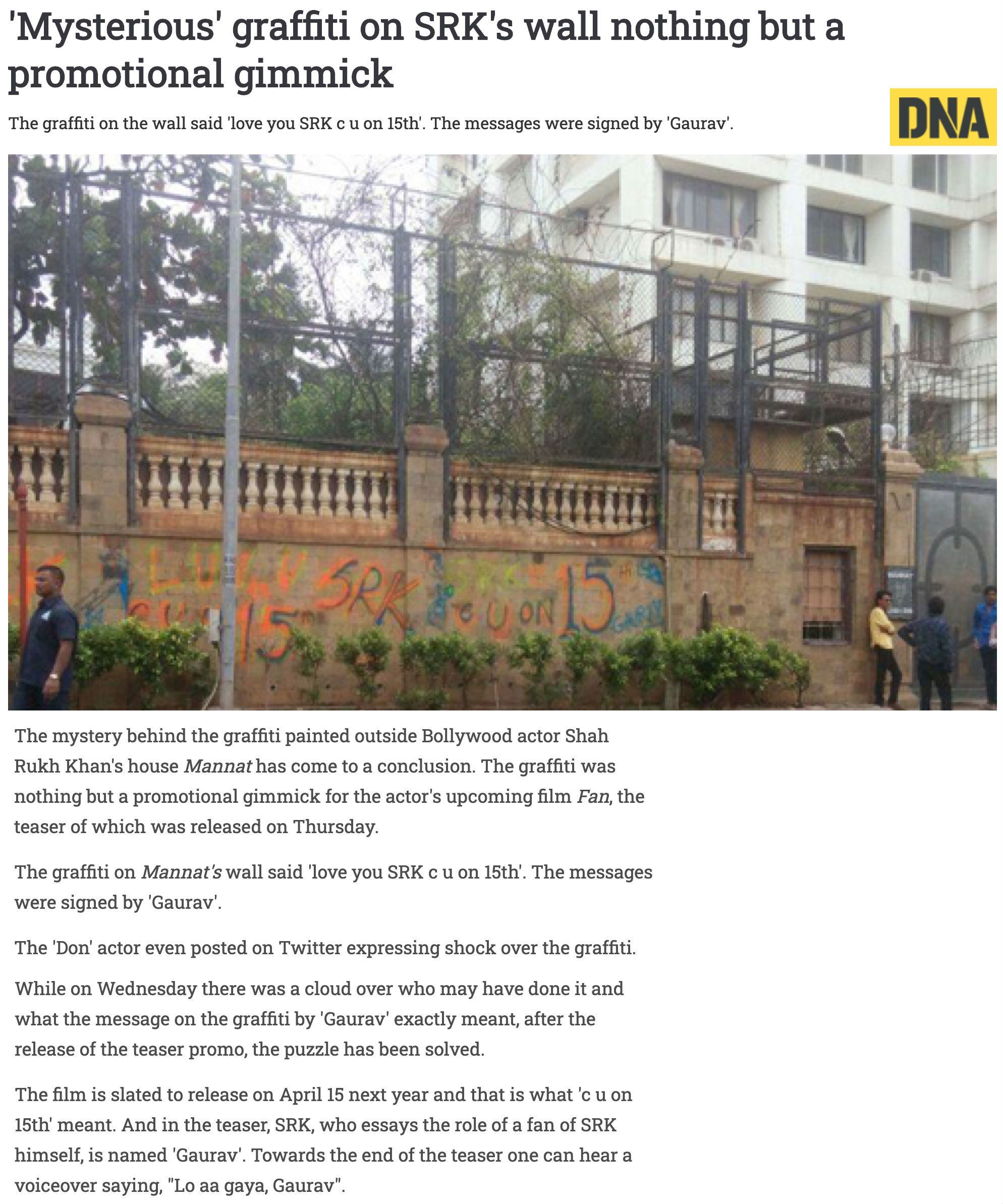 Sounds like a normal day in film-land with stars promoting films with offline gimmicks? Indeed.

Yes, that’s Shah Rukh expressing ‘shock’ over the graffitti outside his house.

Let me explain how it sounds. Shah Rukh is having lunch with friends. He says a lot of things – about his new films, what happened yesterday in the studio, and about that new actor…

And he also says that he was shocked that someone did that to his walls… the graffitti, you know. Friends express shock and they continue chatting.

Now, I’m sure you’d ask me to take a chill pill and not take Shah Rukh’s tweets and Twitter timeline seriously. He’s an ‘actor’ after all.

Fine. I get that.

But consider this. If Shah Rukh had tweeted, ‘Hey you know what? My hair stopped falling after I started using Navratna Oil! Go for it!’, how would you react?

So, was the graffitti tweet ‘obvious’ that it was an ad? At least ‘grey’?

On Twitter, when I posed this question I was told that it was my fault I couldn’t see through the sarcasm!

Fair enough. But could someone please publish and make widely available the title called, ‘How to distinguish sarcasm from truth in Shah Rukh Khan’s Twitter timeline? – A dummies Guide’?

Because, I couldn’t decide if these tweets were true, or if they were part of another stunt.

So, you see where I’m heading?

I’m completely ok with stunts and gimmicks. They are normal things (by now) to promote things/brands/films. But, when you tweet something with no disclaimer AND it happens to be co-existing with other tweets that are real/true/genuine, I think Shah Rukh Khan’s tweets take a new hue.

This gets a bit surreal and psychological, but wouldn’t you wonder when he stops acting and is a real person, in that case? Or, is this an occupational hazard for all actors that people do not trust them inherently because of their screen persona?

The trouble is, on-screen, it is always scripted. Twitter is not scripted if 99% of your tweets are real emotions and feelings. That one tweet where you lie without a disclaimer that it’s a gimmick… doesn’t that muddle your timeline?

Globally, regulators are asking/ordering celebrities and influencers to add a disclaimer if there’s a financial exchange to promote something on social media.

We bay for The Times of India’s blood when we see an editorial or a ‘City’ Times article that seems obviously paid-for and planted. They have all evolved, by now – TOI’s ‘City’ Times has a disclaimer on top, below the masthead – it’s not enough in my view, but it’s a start.

Online, native advertising bread and butter is the way it makes people ‘consume’ interesting content while also listening to a brand tell its story, almost incidentally. But there’s always a disclaimer, somewhere. Why? Because you don’t want people to find it from other sources and start distrusting you.

Now, why wouldn’t that apply to Shah Rukh’s tweets, I wonder? Just because he’s an ‘actor’?

PS: Like Shah Rukh ‘used’ his tweets, Malaika and Arbaaz Khan ‘used’ media earlier. Media was peeved at them back then. But, for Shah Rukh’s tweet, everything is hunky-dory.