Why would this be? Is it that people, in general, are more tuned to the further steps required in e-commerce when it comes to them with a direct intent to shop/browse?

In case of direct traffic, people enter a e-commerce portal?s URL directly and go to the site. Direct intent to either shop or browse, I assume. Referrals, beyond social media referrals, perhaps conveys a similar story, as much as search, where people search for something to buy and land up on an e-commerce store.

Social, by nature of it being conversational and not transactional, may therefore seem like an odd choice to start selling.

In its most recent EQ data, Monetate demonstrates in a very definitive way that social media is not a significant source of direct traffic to ecommerce
websites or purchase conversions from those destinations. Representing just 1.55% of all traffic, and a conversion rate of less than three-quarters
of one percent (.71%), ?social commerce? is a unicorn, at least in terms of last-touch attribution.
Direct URL entry and visits with no known referrer represented nearly half of the more than 500 million visits analyzed, with referrals from search
representing another 31%. It?s important to also point out that any website visits from a native app or traffic to HTTPS websites could also be disguised
as having no referrer.
Still, based on these findings it might be reasonable to conclude that social media participation is over-hyped and disproportionately resourced for
ecommerce websites. And from the perspective of ?What channel were people using immediately prior to visiting the website?? that would be a viable hypothesis.

I have seen this in action too, in the last e-commerce firm I was associated with and it, to put it mildly, very disconcerting. The time spent in building a community and managing it is quite huge. It is a people-intensive task and it needs smart people who can think like a brand and cohesively keep the fans and followers interested.

Jay offers some possible reason for this too, in the Monetate report. 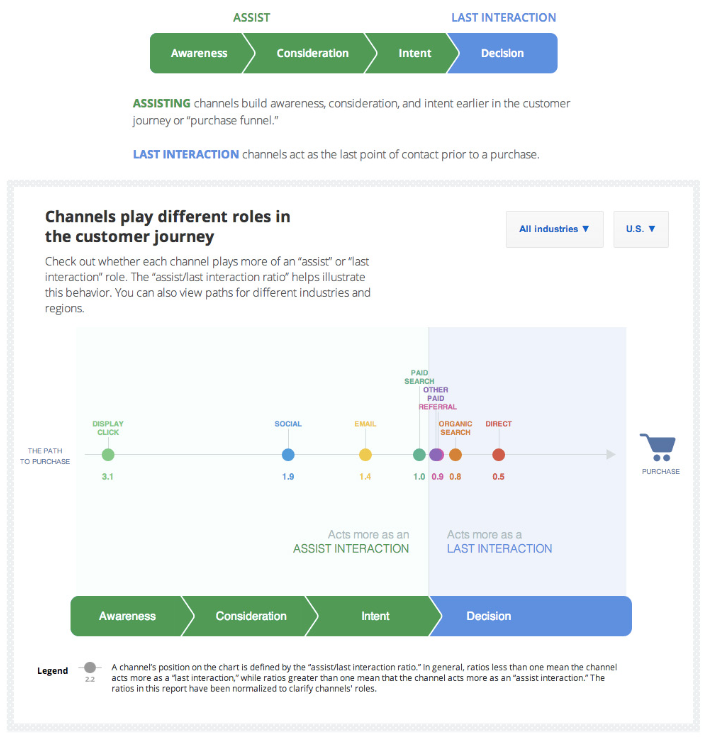 It could be that ecommerce companies are not very good at this type of marketing yet. Data from Edison Research?s ?The Social Habit? found that 66% of American social media users follow brands in social media, at least in part, for deals and special offers, so perhaps ecommerce websites simply aren?t giving their fans what they want in terms of social commerce. Or, it could be that consumers want knowledge of deals and offers, but don?t necessarily want to click on them within a social environment.

Given the extreme stickiness of social networks (especially Facebook and Pinterest), it is indeed possible that part of the issue with social commerce is one of session interruption, whereby consumers don?t want to leave the visceral comforts of their social network by clicking a link and going shopping online, but would rather store the awareness of the deal in their noggin and visit the website later, when they are less ensconced in social media bliss. This, of course, would culminate in a website visit from the direct source, with no credit accrued to the ignition source of social.

Certainly on its face, the data in this EQ looks a little gloomy for social media as a revenue producer. Maybe that?s so. But I refuse to believe that all of our posting, sharing, and liking isn?t at least contributing to ecommerce traffic and sales, considering that we spend more time on social media than on web browsing and email combined.

The trick is proving it, which is why I very much recommend that website owners utilize the ?Assisted Conversions? feature of Google Analytics (or similar functionality from another analytics platform) to better understand the entirety of the funnel and the evermore complicated interplay between the panoply of digital marketing and offline channels.

Add to it, the rampant conversion of top social media properties like Facebook into an advertising super-engine. These days, you don?t even need to balk at a client asking you for 1 million fans in 2 months. If that was without any media spend, you need to, but most clients have understood that it is quite pointless to build a community organically, particularly if the 1 million fan count is the brand manager?s quarterly KPI. So, off goes some of the media budget from offline, and a new 1 million strong community comes into existence with adequate money pushed into Facebook.

So, while reach and visibility can be bought, the holy grail ? conversion ? still seems to be elusive.

I can?t think of any organic way to change this status quo that can actually scale (smaller, focused efforts will work anyway, always), but technology perhaps holds the key to this. Two recent pieces of technology evolution gives me hope.

To be sure, Twitter Cards looks like Facebook?s Mobile Ads Install option to me. But it is being and could be used in highly imaginative ways by e-commerce stores. Here are some non-purchase specific examples of Twitter Cards in action. 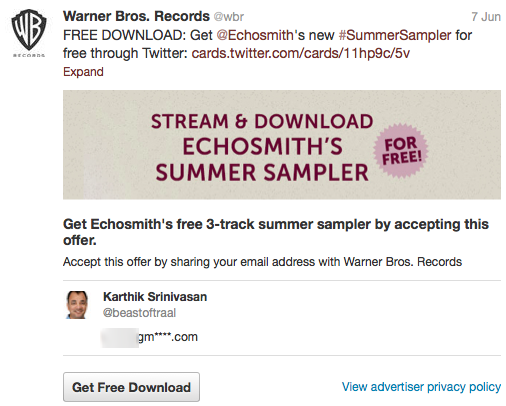 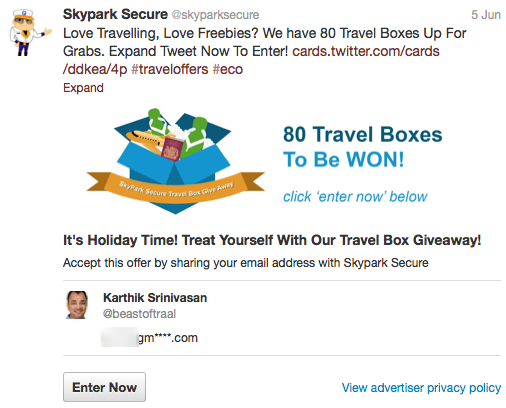 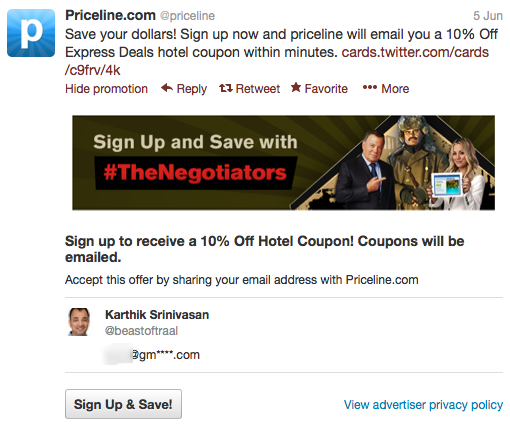 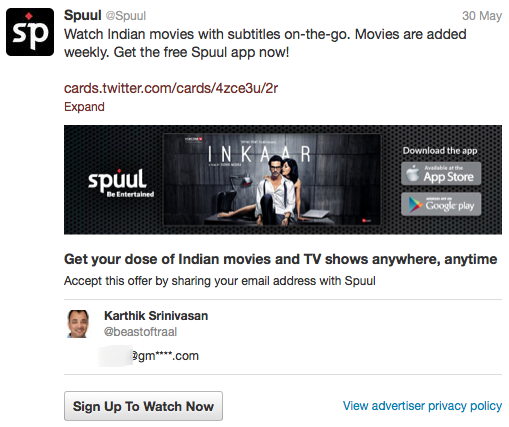 And one from one of Ogilvy?s global clients. 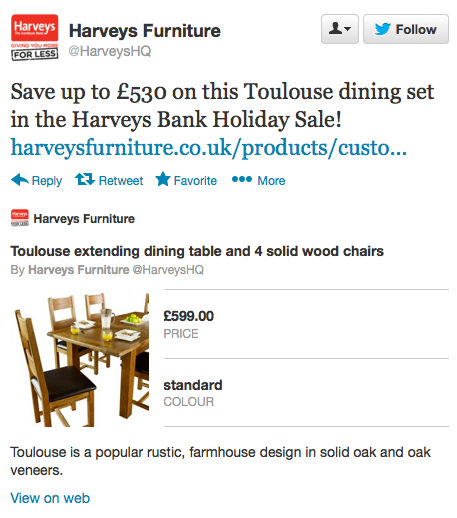 Twitter already has our mail ID, and more recently our phone number, thanks to the 2-step authentication. It?s perhaps just a matter of time that we may share our card details with Twitter (assuming that the security is assured; say, a deal between Twitter and Visa, for instance) and start buying directly via Twitter, through Twitter Cards posted by e-commerce stores.

The second technological update comes all the way from Russia!

No Man Is An Island from Yandex on Vimeo.

Islands are snippets that one can add to the search result which can perform various functions directly from the search result! Yandex says, ?These blocks are the first step to the user?s search goal and can be anything from factual information to purchase buttons or order forms.?, in its introduction blog post.

Here are the 3 ways these snippets can be customized, as of now, according to Yandex. 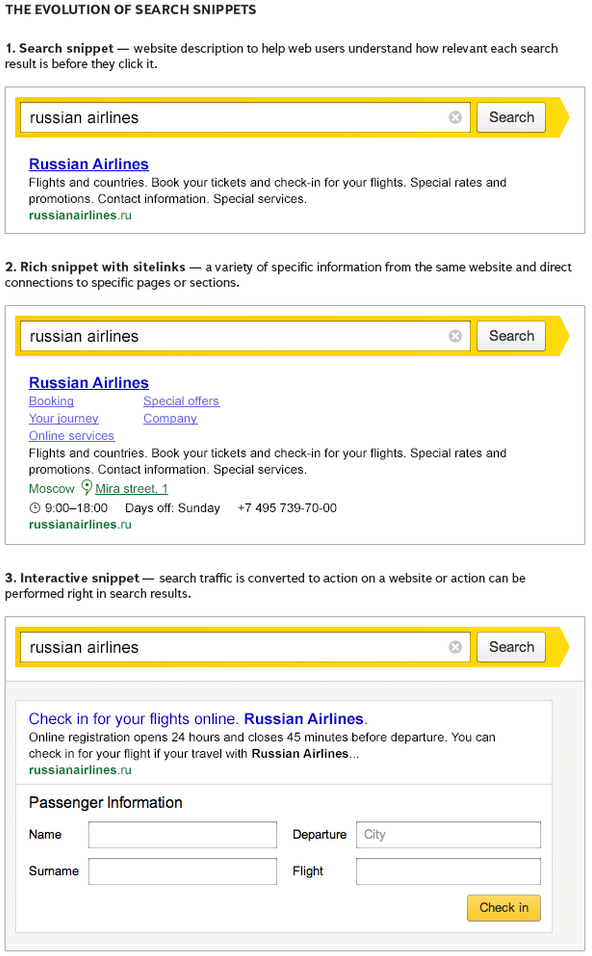 A direct action like purchase is perhaps just a few months away. While this will no doubt increase the already bloated pie of traffic from search (to e-commerce), there?s no reason why social media channels cannot use the snippets idea to enhance their potential as a source of traffic and revenue to e-commerce websites and also stake a claim in the proceeds.