Closeup’s new campaign, #FreeToLove is BOLD, I admit. Why is it bold? Here are 4 reasons. 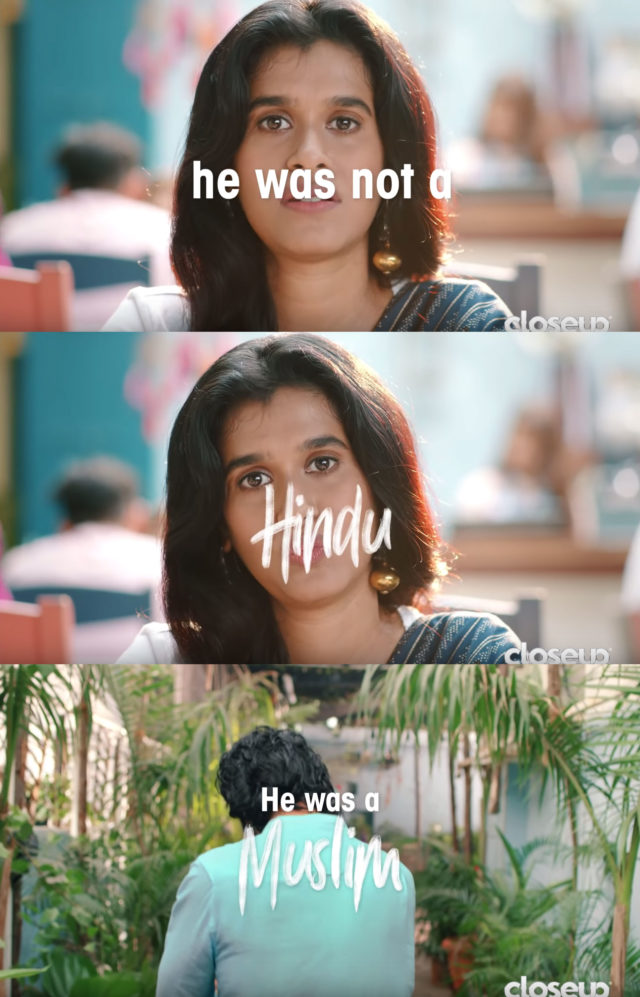 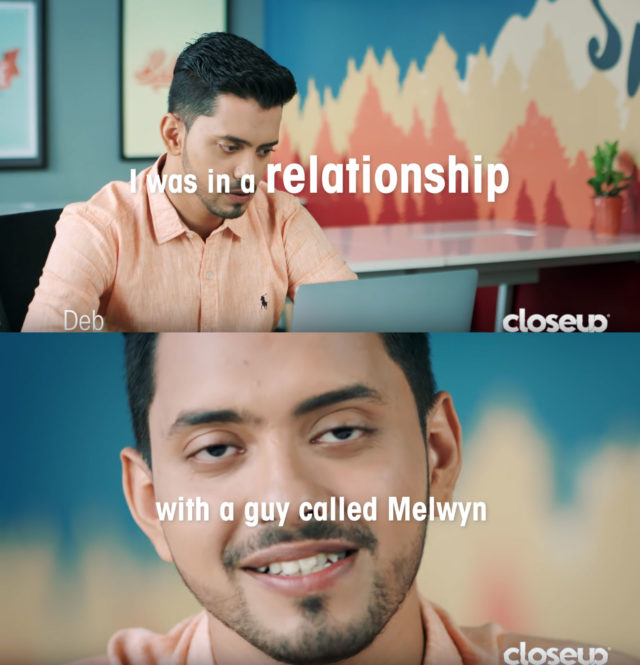 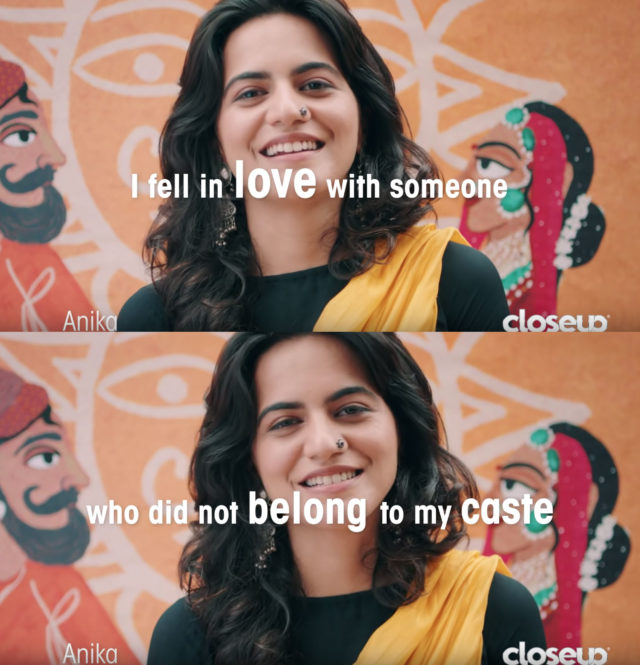 In a country where a film (Kedarnath) is in a controversy because the lead actor’s character is Muslim (played by Sushant Singh Rajput) and the lead actress is a Hindu (played by Sara Ali Khan)… and that the film promotes ‘Love Jihad’, this new campaign by Closeup is indeed bold.

Does it make sense for the brand, though? For instance, when a brand takes on a larger stand that stirs a debate and places the brand in context (depending on the money spent on advertising), the issue being raised needs to connect inherently and intricately with the brand. An example of where it did not is Mirinda’s Release The Pressure. Mirinda’s ‘pressure’ is opening the fizzy bottle (fizz as pressure. Clever, huh?). Connecting that with students’ ‘pressure’ for exams is a massive leap of imagination.

So, for Closeup, does it even make sense? I believe, to some extent, it does. Closeup has always been about ‘fresh breath’ and ‘confidence’ as a lever for ‘coming closer’. With #FreeToLove, it almost looks like the brand wants to go behind the people who come close. Who are these people? What do they do? What problems do they face while coming closer (owing to fresh breath, of course, among many other, more important factors)? Is there a larger story behind those problems?

The positioning is still around coming close, though the brand is not claiming that their product is instrumental in bringing them close this time (unlike the earlier transactional communication where there was a linear connection between using Closeup and two good-looking people coming together). The brand moves tangentially from the ‘coming closer’ plank and goes deeper into who they are.

It’s a smart idea, no doubt, but also controversial owing to the kind of relationships it chooses to depict.

The campaign was first launched in the Philippines in September 2018. Two agencies seem to be involved in conceiving this campaign – VICE’s VIRTUE and Mullen Lowe.

The India campaign website has, besides the videos, a 20-page whitepaper (PDF – 20MB) to add credibility and depth to the idea behind the campaign. This Mullen Lowe blog post also explains the thinking behind how they approached the idea and the whitepaper. 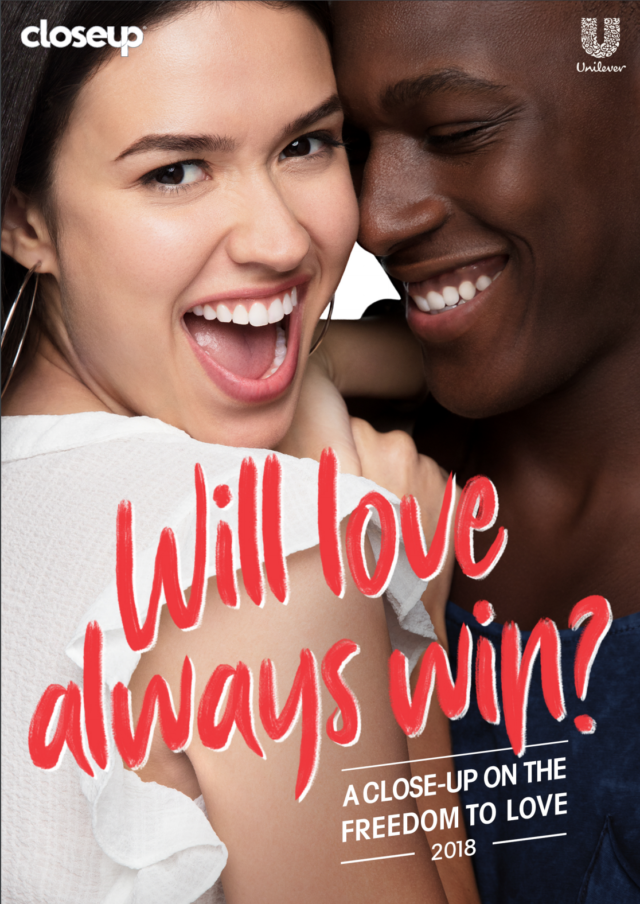 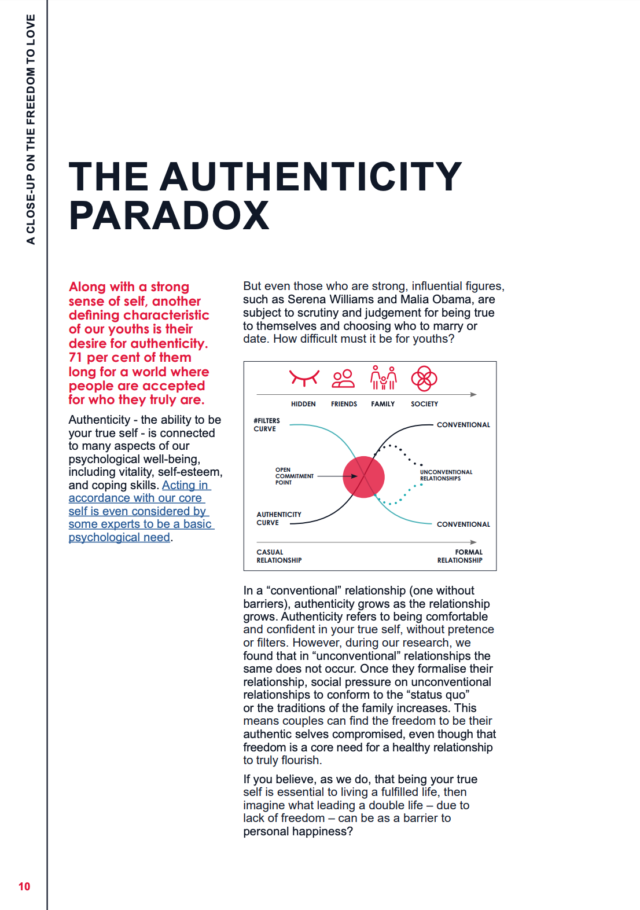 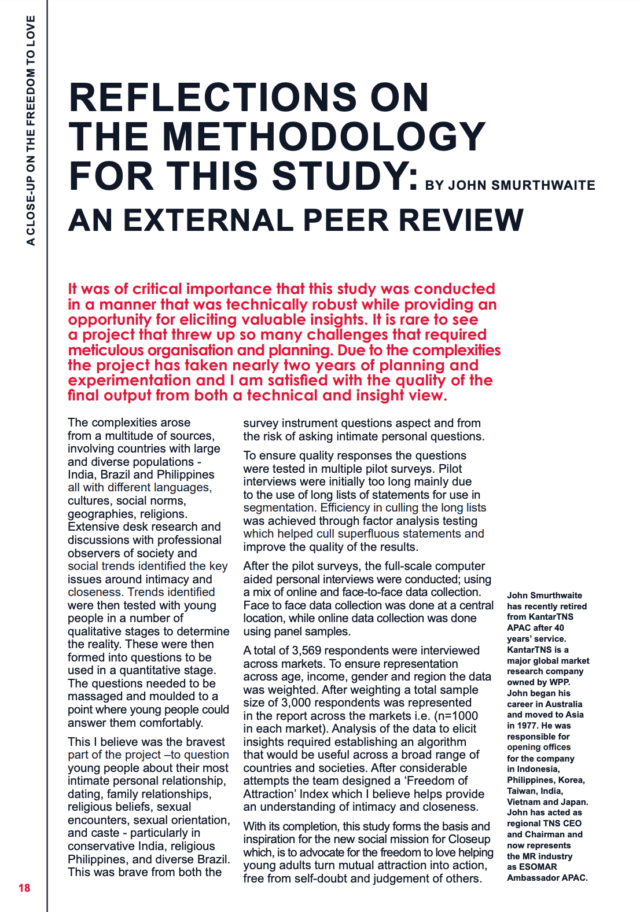 Few observations on the campaign:

1. The sequence of communication is that they start with #FreeToLove Lost series of videos and then move on to #FreeToLove videos. The Lost series has just been launched in India where the common thread is about couples who had previously broken up owing to societal or parental opposition meet once more. I’m assuming the 2nd series will be launched early next year in India.

Here are the 2nd phase #FreeToLove stories from the Philippines:

2. Closeup India has been very, very sporadic on social media. The last tweet, for example, before the #FreeToLove series started on November 24th, was on September 6th, talking about the Supreme Court ruling on the decriminalization of Section 377, and this seems oddly perfect as a precursor to this campaign next. (Prior to that, the last tweet was on February 15, incidentally). 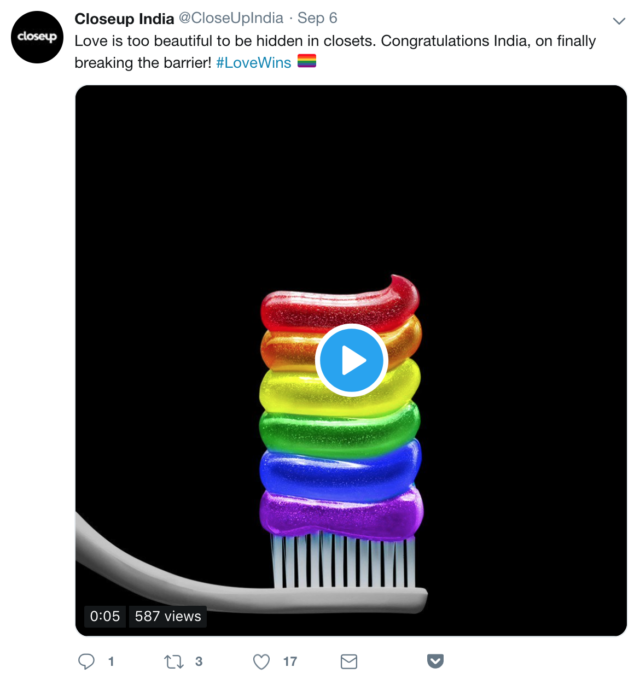 The absence of a woman-woman story seems like an intriguing miss considering other brands like Myntra’s Anouk have pushed that envelope quite effectively back in 2015!

Also, the equivalent of inter-race couples in India, according to the team that chose these films, seems to be caste and religion based stories. The religion angle has 2 Hindu-Muslim stories (Hindu-Christian or Muslim-Christian is not controversial enough?), but the caste story seems entirely superficial given how deep that runs in India. Here is the most recent example that ended with the violent death of the couple in question.

Still, kudos to at least add a superficial caste angle in the mix and not shunning away from it.

4. Given that this has been conceived as a multi-country campaign, the song and music-video seem to have been planned as multi-country too. The result is that, in an Indian context, it looks adequately Western and alien. This perhaps demanded a more native approach, say a Maati Baani or an equivalent youth band and its music. 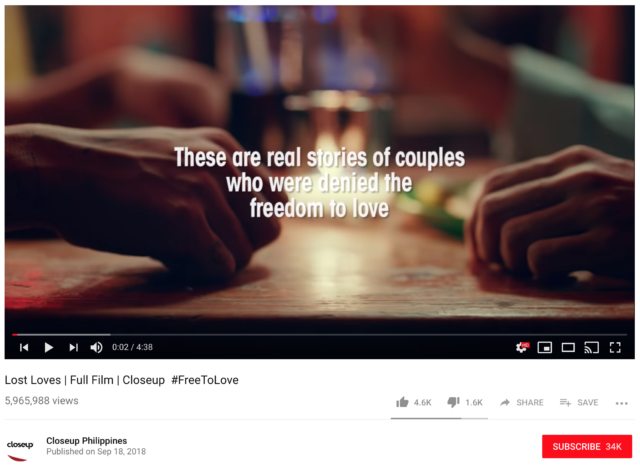 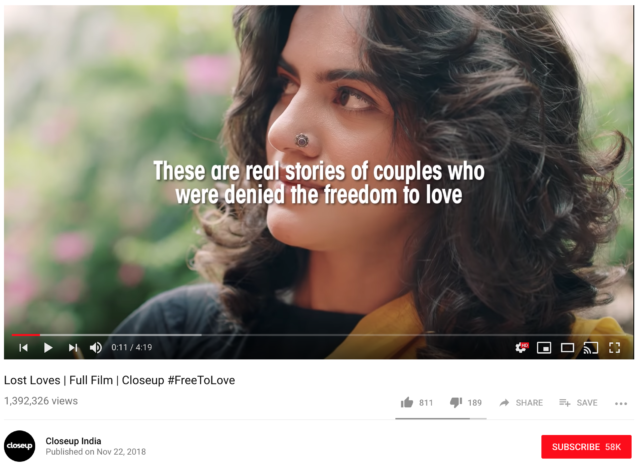 6. On Facebook, there are a few comments from people for Closeup’s official upload of the films. It’s early days for this campaign and there would no doubt be a LOT more comments soon (given the controversial angle), but even from the early comments, there is an interesting point I observed. The first story, Anika and Rahul, may be an actual ‘real story’ but features actors playing Anika and Rahul. Friends of the actors have commented below the Facebook post congratulating them! Incidentally, Anika is Amrai Gupta and Rahul is Milinda Sharma. 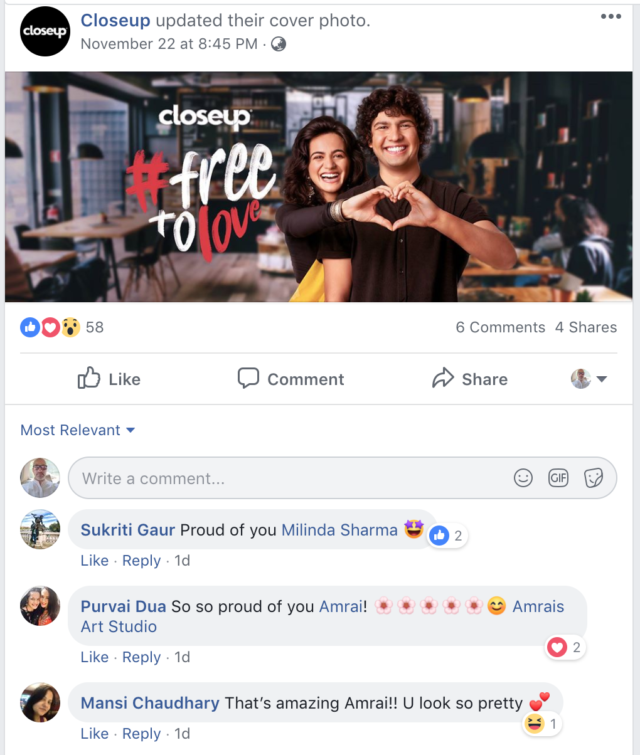 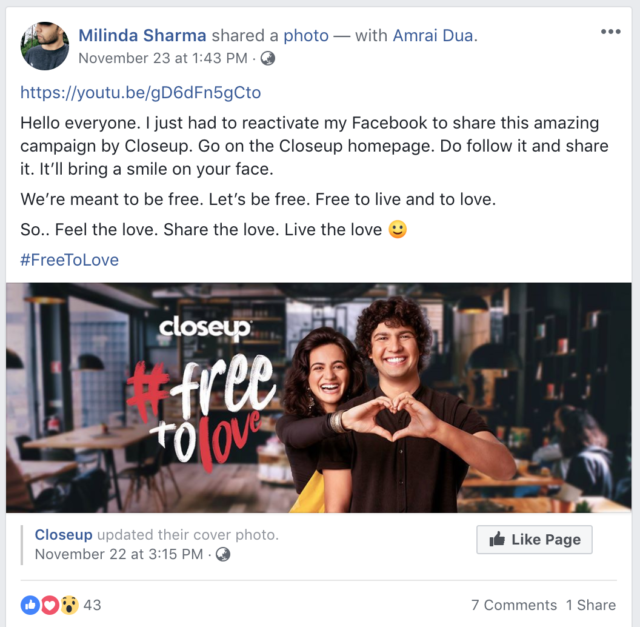 But, in the Deb & Melwyn story, Deb seems to be really Deb (Debendra Nath Sanyal). 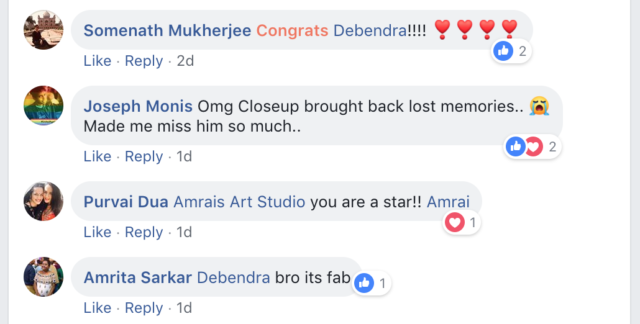 My question is – some stories are possibly both real and feature actual people, while others may be ‘real stories’ featuring actors. In a situation where authentic communication is demanded from brands that take a stand, does this mixed reality work? Should the brand also mention that the real stories feature actors enacting those stories?

If they didn’t think it was important, the comments below the videos, tagging the actors, convey that anyway. This may not be a problem at all with Closeup’s earlier campaigns because it was a make-believe narrative anyway. But when the brand is attempting to be sincere and real (rooted in real problems of its target audience) while taking a stand, should the narrative also include actual stories *and* actual people instead of actors?

7. Instagram may be the hottest social media platform for ‘youth’ in India but Closeup doesn’t think so! Yet. 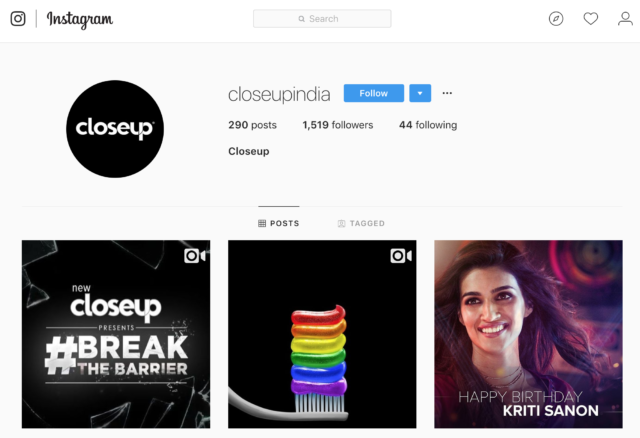 8. My larger concern around the well-intended theme is that it remains at a superfluous level. It continues to feature great looking people (actors and models!) meeting in fashionably posh restaurants, almost like an extension of Closeup’s earlier advertising. The theme they are talking about has a very strong resonance in India, already divided by caste and religion and made more acute and vocal due to politicians using it as a powerful wedge to divide people for their selfish motives (the same divide-and-rule policy adopted by the British). There are many, many real stories of couples getting closer despite parental and societal opposition and there are many nuances in those stories beyond just a ‘Punjabi’ and a ‘Brahmin’. It gets incredibly grimy, violent and local, unlike these beautifully framed stories.

I do understand that those stories and those people are not Closeup’s target audience, but, for a campaign that purports to tell real stories (albeit using actors), the narrative remains at a level far removed from the reality of the country.

9. As I had mentioned earlier, this campaign is in its early days. Closeup is yet to bombard us with advertisements in print… or, like many other campaigns that approach all-things caste and religion using only web films/content, perhaps Closeup will completely avoid mainstream media and use only the online media for this one.

But, at least based on the few comments so far (on the cesspool called Twitter), this is going to blow up depending on the number of people who come to know about it and the media money Closeup puts behind it. 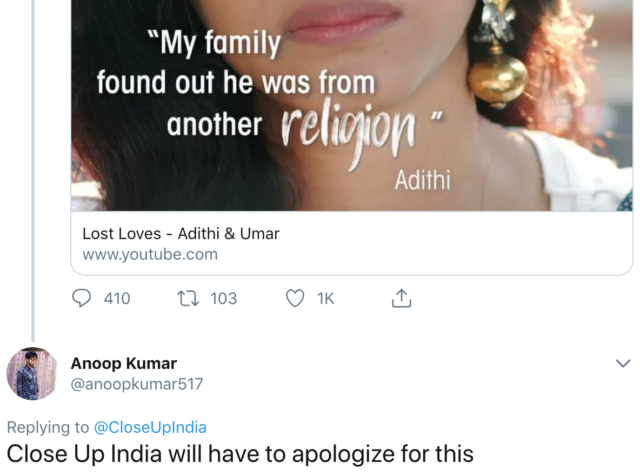 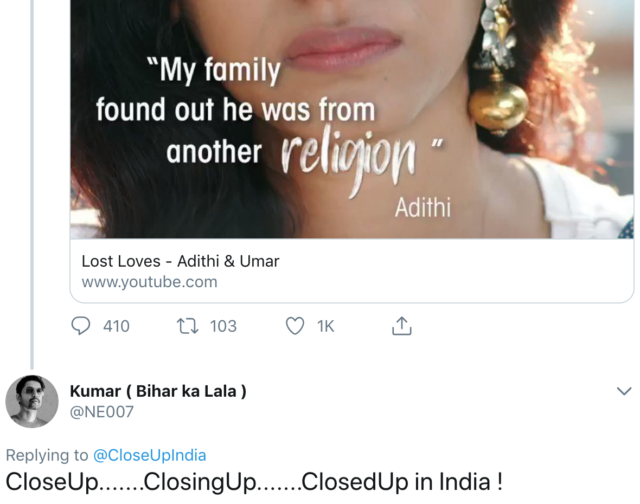 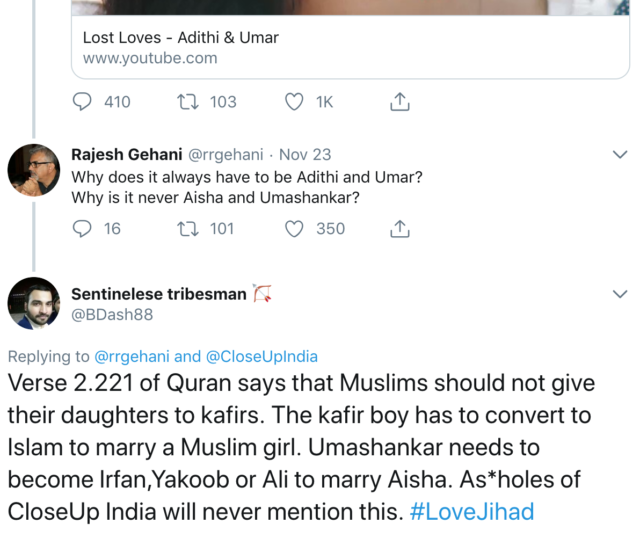 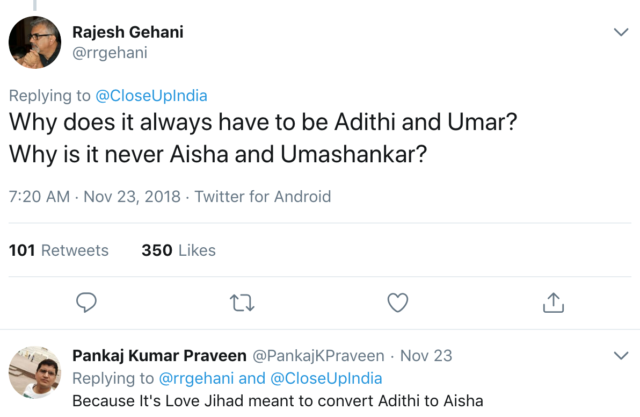 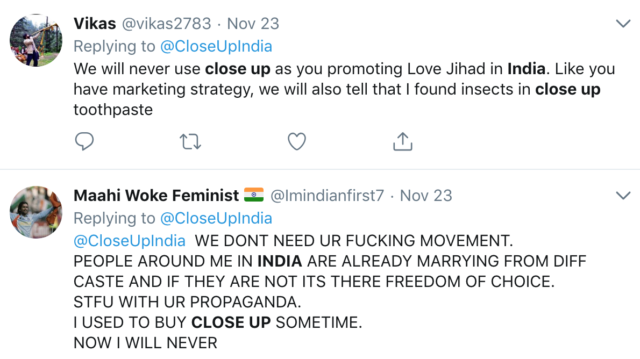 For all these diverse negative views, Closeup’s effort in engaging with some people, at least on Twitter, seems way too typical of large brands attempting social media engagement – copy-pasting stock sentences. 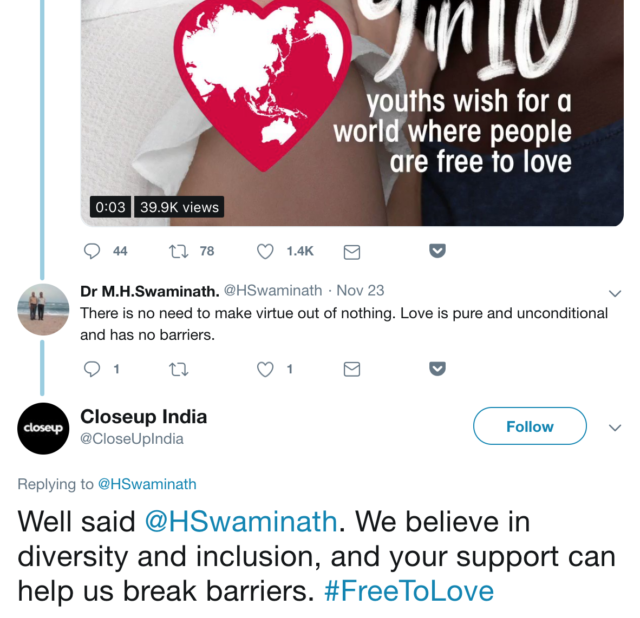 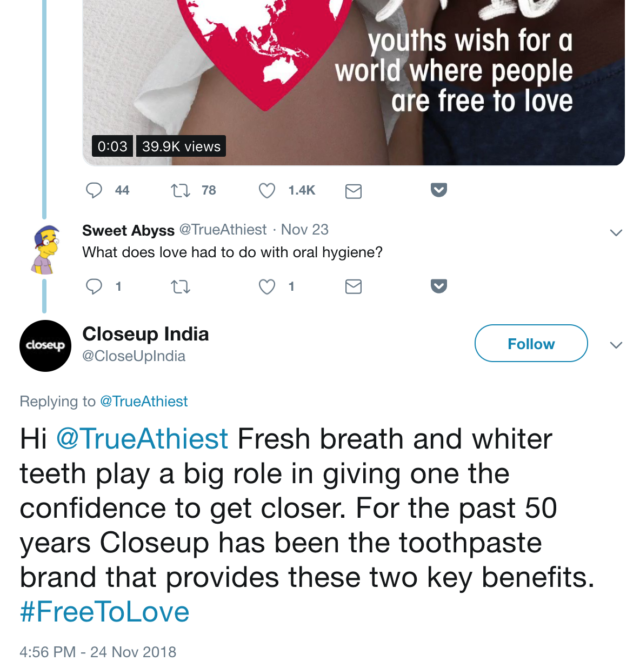 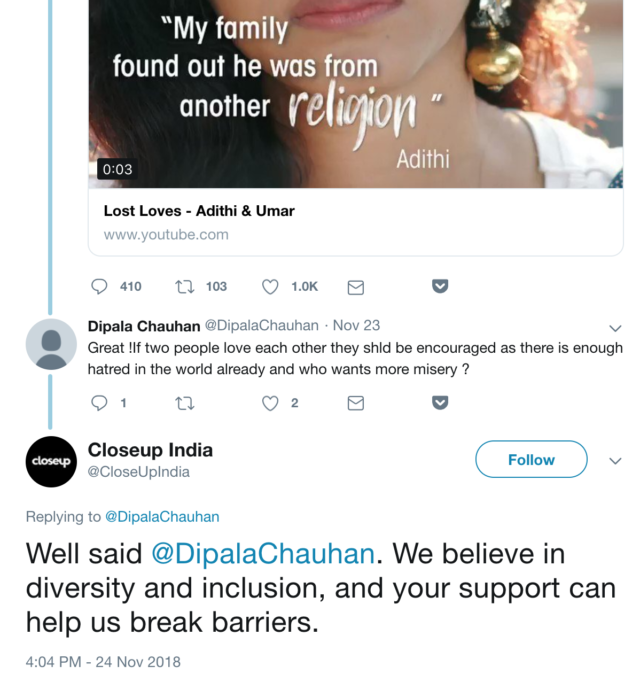 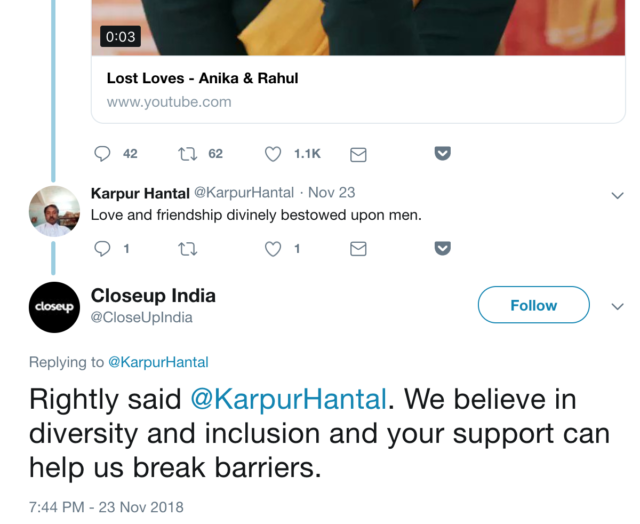 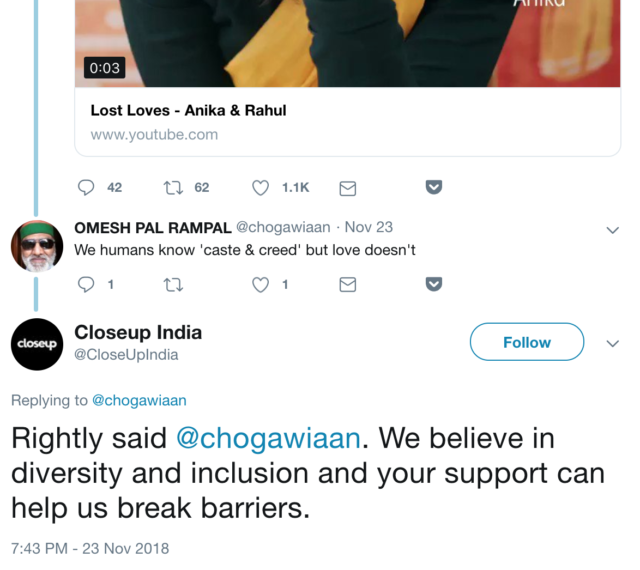 If the intention was to stir a discussion, I think this campaign has legs. There’s bound to be a more vocal protest using the ‘Love Jihad’ angle that some people have already latched on to. But, beyond stirring a debate and making people think (on both sides of the equation – more love and more hate), if one segment starts a boycott call for Closeup (it has happened in the past given the polarized political climate), then Closeup would have to face an uphill battle because people—its users—may not fight for a brand that sells mere… toothpaste. And hasn’t been, in the past, known for taking a stand this vocally. I really hope Closeup India has planned multiple communication scenarios, including crisis communication.