A lot has been said about the friendly banter between Parle and Britannia, on Twitter.

…it's good to see a mild banter between 2 brands that are rivals, even though the products showcased here are not direct rivals (Parle Melody & Britannia Little Hearts). The banter isn't particularly smart, but at least it is not mean, and is actually good-hearted 🙂 pic.twitter.com/OIfW7nnxGS

Here’s Madhavan Narayanan’s perspective, ‘Brands are in competition, not at war. Sometimes, love for a rival can go a long way’, for ReputationMag.

Two interesting things that people seem to have missed.

1. Parle tweeted to Britannia, by tagging its corporate Twitter handle, on August 21, 2018. Britannia’s response was on September 6, 2016, more than 2 weeks later. Bestmediainfo did note the delay in an article (read the write-up), but, funnily, they made it sound like a big problem, pointing out that the delay was owing to getting approvals from a complex organizational hierarchy.

2. Here’s why that delay is hardly a concern.

Reason 1: Parle has, as of today, 564 followers. 564! Even Bestmediainfo’s article was on September 10th, *after* Britannia responded to Parle’s tweet. If Britannia hadn’t responded, very few people would have even taken note of Parle’s initial tweet.

Reason 2: Notice the engagement numbers on Parle’s tweet? And on Britannia’s response? And Parle’s response? The highest is for Britannia!

Britannia’s corporate handle is not wildly popular on Twitter either. It only has 3,200+ followers. The magic sauce is paid promotion on Twitter. 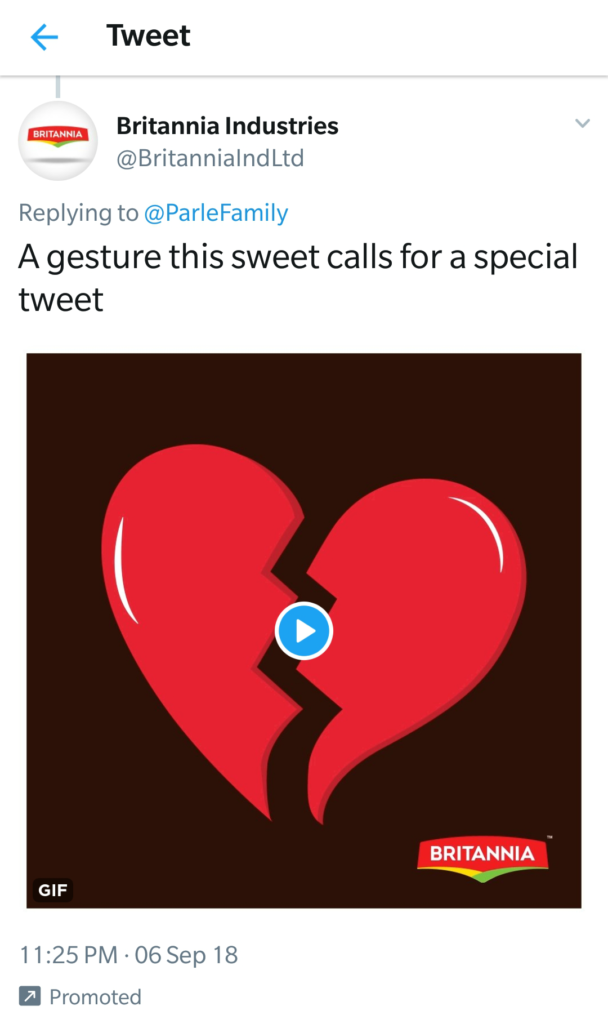 Britannia was smart to respond when they can/wanted to, but when they did, they promoted their response on Twitter. Most people came to know of Parle’s original tweet only by seeing Britannia’s tweet response first!

Bottom-line: Britannia was smart in gauging the situation with regard to Parle tweet’s traction and ensured that they won the visibility game using paid push. So, ‘late’ hardly matters in this scenario.

The third part is a counter-point about Parle having won the game, with no media push, at the expense of Britannia, which did spend money on media. I did consider that before sharing today’s post. But, there are a couple of points that made me not come to that conclusion.

1. As I had mentioned in my earlier post, the conversation, from both brands, is not particularly smart or intelligent. Parle’s first tweet was good-natured, but in a bland way, like a well-intentioned PSA feature film like PadMan. It wasn’t entertaining or share-worthy, and even put the focus on its own product (Melody) in the caption and the visual (‘find the melody to many more little hearts’ isn’t particularly clever in any way). It’s just… blah. But, good-natured. Result? Perhaps even Britannia didn’t think much of this out-of-the-blue unwarranted goodness for 2 weeks!

2. The 2nd response is nothing but a plain Parle push (Melody again). That caption may be familiar to people in the 40s-50s now since that was used back in the 80s and 90s. For the kids around, it’d wouldn’t particularly ring a bell or evoke a reaction. Result? Not too much engagement.

3. The winner, IMO, Britannia didn’t do anything that clever either. Just asked, ‘Aaw, Melody itni sweet kyon hain?’ as if giving them a free serve to respond with their famous caption. But, again, it was responding to good-natured banter nicely. They had the opportunity to use their own product, ‘Little Hearts, since Parle alluded to it too directly, but didn’t! But, they clearly had the smarter media team. They promoted it to simply win the engagement game.

The trouble with promotion on Twitter is that, in a busy timeline, people notice Britannia’s tweet, smile and move on. Very few people click on it to see the context of why Britannia wrote that tweet in the first place, and if Parle responded or not. That shows in the sheer number of people who voluntarily left a digitally visible engagement mark (Like, Retweet or Favorite) on the tweet. That explains why Britannia’s bland tweet has all the numbers, while Parle’s both tweets pale in comparison. People are fundamentally lazy and focused on their timeline, not on the heart-warming story of 2 grand old brands masquerading as ‘youth’ on Twitter (that’s only for people like me, and you, reading this post 🙂 ). Within their laziness, a fraction of those people thought Britannia did something cute and Favorited it a lot.